San Francisco has long been a destination for the adventurous and the unconventional.  The city tends to attract creative individuals who desire the freedom to express their ideas and live by a code of possibilities rather than the expectations of others.

During the years leading up to the Summer of Love, thousands of young adults were lured to San Francisco by the excitement of the “multicultural spirit” that influenced the art and music.  Many felt compelled to re-evaluate cultural norms and personal priorities.  This was brought on by a lengthy Autumn of inquiry and exploration inspired by Jack Kerouac’s On the Road; the bitter, drawn-out Winter of resistance against the Vietnam War; a promising Spring of peaceful celebrations like the Trips Festival in January 1966 and “A Gathering of the Tribes” in January 1967 that sowed seeds of harmony.  By the peak of Summer, the counterculture had turned up the heat so their voices would be heard on the other side of the country. 1 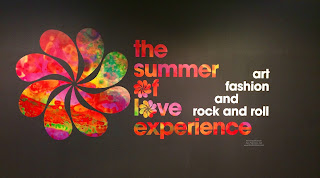 “In 1967, San Francisco’s Golden Gate Park and Haight-Ashbury district teemed
with about 100,000 youth who arrived from around the country,
drawn by a vibrant music scene and seeking the like-minded individuals.”2

The Summer of Love Experience Art Fashion and Rock and Roll is currently on exhibit at the de Young Museum through August 20, 2017.  It’s a colorful display highlighting the the important events that gave rise to San Francisco’s 1960s counterculture which is described as “unique, namely because it was as much an artistic movement as it was a political one.” 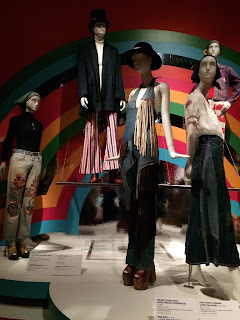 Rebellion was the muse for many artists throughout this tumultuous decade.  They weren’t as interested in troublemaking as they were in making waves.  The various art forms were an outlet to channel outrage in outrageous ways with vibrant swirling prints, surreal patterns, and clever slogans that expressed dissent with humor.  Peaceful gatherings were formed to protest foreign policy and to promote a live and let live attitude.

Fashion made it possible to show solidarity with the counterculture in San Francisco. Bohemian was the predominate trend so unusual clothes were made from a variety of materials found at arts and crafts stores and vintage shops.  The ensembles defied mainstream fashion with quirky patches, colorful embroidery, deconstructed denim, and hand-painted dresses.  Citizens who had served in the Peace Corps used beads and trinkets brought back from countries where they had volunteered to adorn peasant tops and maxi dresses. 3 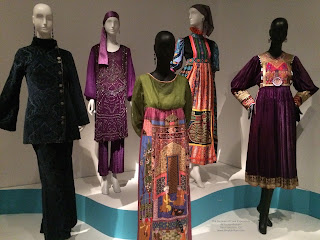 The soundtrack for the Summer of Love was the eclectic “San Francisco Sound” that was known for being improvisational.  Anyone with a drum could participate in impromptu concerts on Hippie Hill near Haight Street. 4   The musicians’ clothing was also a source of entertainment because originality was the dress code.  A fringed suede jacket and boots, hip-huggers and platform sandals, cropped bell bottoms and moccasins, and a peace sign painted on a cheek were just some of the carefree looks that took hold.  If you really wanted to exert your independence, you wore a floppy hat or scarf over your long, beautiful hair.

At times, The Summer of Love Experience was like an interactive exhibition as visitors were heard telling personal stories in front of posters advertising shows at the Avalon Ballroom.  There were references to civil rights, the day a draft notice was received, and the fight for environmental protection.  But there were also fond recollections about camaraderie and empowerment.  The pilgrimage to San Francisco during the 60‘s wasn’t just about disenchantment, it was more like a gold rush of hopefulness because the counterculture was seeking liberation, a treasure we all value.

Free People Beneath The Sea Top

Email ThisBlogThis!Share to TwitterShare to FacebookShare to Pinterest
Designers: art, deYoung Museum, Free People, San Francisco Style, Summer of Love
Newer Post Older Post Home
This website uses cookies. By continuing to use this site, you accept our use of cookies. Or you can close this browser window to leave the site.