What would you do to ensure your opinion is taken seriously when you’re the only female in a room full of foreign diplomats?  Would you conduct yourself according to their cultural expectations?  Would you dress according to acceptable standards for a businesswoman?  Should you play it safe and downplay your exemplary qualifications to gain allies?  If you were in Madeleine Albright’s position, you would speak out and reinforce your message with “diplomatic arsenal” so there’s no room for misunderstanding.1

Madeleine Albright served as ambassador to the United Nations (1993-1997) and was the first woman to serve as US Secretary of State (1997-2001).  Her valiant negotiating skills were legendary among the corp of diplomats she worked with while defending America’s foreign policy.  She honed her sharp wit with style and substance during contentious discussions about international affairs.  Ms. Albright was also known for wearing audacious pins that were described as “implements of statecraft” because of the unequivocal message each one symbolized.2
Read My Pins The Madeleine Albright Collection is currently on display at the Legion of Honor in San Francisco.  The exhibition provides insight into how Ms. Albright used the power of jewelry to convey her stance on crucial issues.  The “Atlas” pin, signifying the weight of the world diplomats carried on their shoulders, was only worn to the most important meetings.  The shattered glass on “Breaking the Glass Ceiling” was symbolic of women’s outstanding career achievements.  And “A Woman Among Men” speaks for itself.3 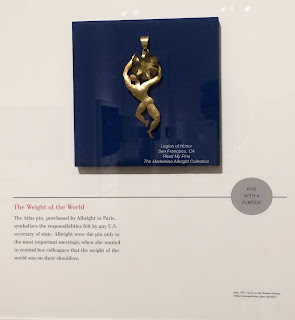 Ms. Albright’s fondness for wearing oversized insect pins became a way for adversaries to gauge her attitude before a meeting started.  A wasp or bee signified a stinging message was to be delivered; a dragonfly was reserved for occasions when she didn’t wish to disclose her intentions; a ladybug represented feelings of goodwill; and beware the days she wore a spider.4

If pins were her diplomatic arsenal, Stetson hats were Ms. Albright’s fashion arsenal against all sorts of weather conditions during her grueling travel schedule. This symbol of the great American west was the perfect accessory for the iconic Madam Secretary who served her country with courage and leadership.5

How will you set yourself apart this year?  Do you have an implement of persuasion that's especially meaningful?  Is there a certain symbol that inspires you to be brave?  A special talisman imprinted with good luck that you carry to important meetings?  Perhaps it’s a family heirloom presented on your 21st birthday that emboldens you to take risks.  Maybe it’s something you keep near when you must call a bully’s bluff, or something you hold dear when you need to exert your influence.  Jewelry is precious, but confidence is the real treasure you possess.

Email ThisBlogThis!Share to TwitterShare to FacebookShare to Pinterest
Designers: art, jewelry, Legion of Honor, Madeleine Albright, RumoR, San Francisco Style
Newer Post Older Post Home
This website uses cookies. By continuing to use this site, you accept our use of cookies. Or you can close this browser window to leave the site.