An Eye For Authenticity

Irving Penn’s camera was like a time machine, it could propel your imagination into the future with abstract compositions, transport your curiosity to the past with a photographic expedition of an ancient culture, and delve deeper into the present moment with incisive portraiture.  Thoughtful lighting coaxed out hidden characteristics and gave an added dimension to the subject’s mood, and Penn’s mastery of platinum printing produced a spellbinding quality unique to his timeless photographs. 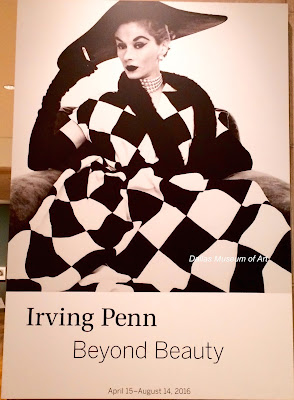 The exhibition, Irving Penn: Beyond Beauty, is currently at the Dallas Museum of Art through August 14, 2016.  The black and white images from the 1940’s - 1960’s are rich in tonal details creating a fascinating portrayal of icons from the art and design worlds.  In contrast to ordinary digital pictures snapped on a phone, this collection from the Smithsonian American Art Museum is mesmerizing and profound.  The passage of time is felt in a still-life of decaying flowers; an elegant Dior glove is transformed into art by presenting it as a piece of sculpture; and a cracked egg spilling onto the surface is at first peculiar until the symbolism of breaking through a protective cover becomes clear.

A powerful portrait of Salvador Dali shows the creative intensity of the legendary surrealist with his captivating expression and confident body language.  A 1948 photograph of Truman Capote kneeling on a chair shows how cleverly Penn used shadows as props to heighten emotion and draw the viewer into the subject’s personal space.  While hesitation is safely bundled in an overcoat, a long vertical shadow appears to support the author’s budding talent.

an ode to haute couture

Irving Penn was a preeminent fashion photographer for many decades.  When Mr. Penn began photographing for Vogue in 1943 it was during a time of fastidious fashion, not fast fashion.  His respect for the exceptional details of designer dressmaking was evident in many up-close studies.  Balenciaga Sleeve (1950) highlighted the contours of the pleated fabric as though Penn was expressing an ode to haute couture.  The bold pattern in Harlequin Dress (1950), was balanced with an oversized, geometric-shaped hat and full length gloves.  Penn also shattered conventional standards for glamour when he photographed a woman’s lips smeared with several shades of lipstick.  He understood the impact of imperfection with all its in-your-face disruptiveness.

Irving Penn was a master at revealing what is often concealed.  A minimalist backdrop and compelling silhouettes were used to capture the essence of a subject’s personality.  Penn had an eye for authenticity and was adept at illuminating the true nature of his subjects.

"I have always stood in awe of the camera.
I recognize it for the instrument it is, part Stradivarius, part scalpel."