Coastal sunsets are nature’s most dramatic performance art.  Like a mega star, the sun lights up the sky with spectacular visual effects as it illuminates the cast of clouds scattered across the horizon.  These productions are multi-sensory and mesmerizing with an accompaniment by an orchestra of waves crashing into the cliff and splashing over rocks.

On a recent February evening when the sun was immersed in a twilight tinged gold, a bicyclist abruptly appeared in my view as though he was late for an important event.  He stopped at the edge of the beach cliff as though he’d done this 100 times before.  After several minutes, I realized he was in his reserved seat for the winter sunset series. 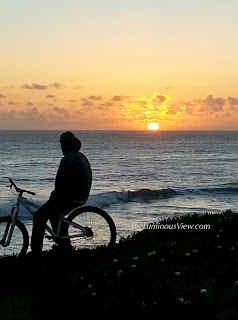 Sitting on a bench 30’ back from the cliff is pure leisure compared to sitting on a bike perched 30’ above the water.  While I was reclined and simply observing the beauty, he seemed inclined to be a part of the scenery in his oversized black hoodie and cap.

Perhaps he was a surfer completely at ease on the edge while surveying his vast domain. Maybe he was rewinding the day, or fast-forwarding to the next.  Better yet, maybe he was simply listening to the sound of the waves.
Reserve a seat for nature’s performances.  The front row is meditative, moving, and magnificent.